9 Million Euros for Intelligent Household Robots Made in Austria 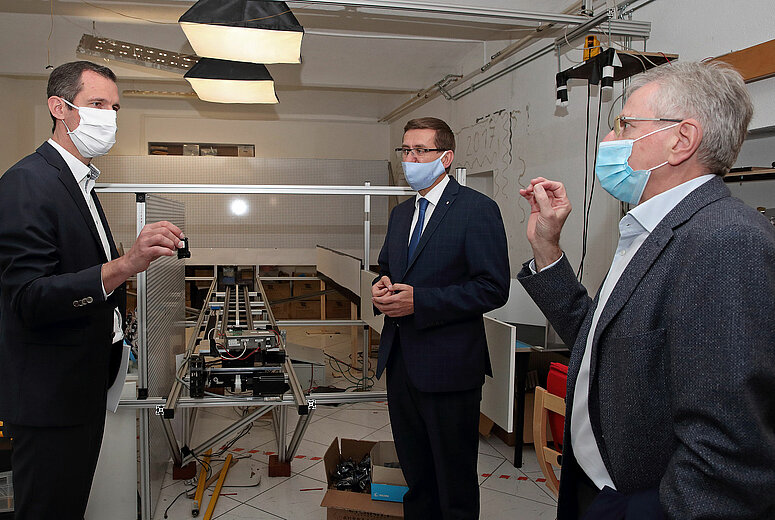 Robart, the Austrian robotics company headquartered in Linz, is attracting funds from the European Investment Bank (EIB). Less than five percent of all applicants across Europe manage this. The EIB only supports companies that have a clear technological lead and target a growth market. Robart will receive a loan of nine million Euros, which will be invested in the research and development of household robots with artificial intelligence.

Former Austrian Vice Chancellor Wilhelm Molterer, Managing Director of the European Fund for Strategic Investments at the EIB since 2015, emphasizes the EIB’s mission to promote innovation. “This is how research and development is financed where a higher project risk naturally exists.”

Upper Austria’s State Minister for Economics and Research, Markus Achleitner, points to the fact that robots will soon be among the self-evident little helpers in the household. “When you think of robots, you shouldn’t just think of production halls. Especially in a household where a robot is exposed to new situations every day, the interaction between humans and robots is decisive.”

This togetherness is precisely what Robart focuses on. “We are investing the money in the next generation of intelligent household robots, which you can communicate with in a way you similarly would with people,” explains Robart CEO Harold Artés. “We envision a future where every household has a practical and affordable robotic butler. The positive decision of the European Investment Bank confirms that we are on the right track.”

Robart employs around 60 people, holds over one hundred patents and patent applications, and has branch offices in China, Germany and the USA. Currently, the company is centering its attention on cleaning and vacuuming robots with laser navigation, which can be controlled using an app or voice assistant. So far, Robart has mainly supplied large manufacturers of household appliances with technology or complete products, including BSH, Rowenta, Kärcher and Medion.

Start-ups and technology companies find it difficult to obtain conventional loans. They cannot offer the bank machines or real estate as security, and know-how alone cannot be mortgaged. This is where the European Investment Bank steps in.

The EIB grants loans to companies that are clear and sustainable technological leaders, also in comparison to Asia and the USA, and are active in a growth market with great potential. This requires in-depth know-how, highly qualified employees and specific patents. Only a few companies manage to meet these criteria and pass the extensive tests – including those done on site. “We worked for over a year to get a commitment from the EIB,” notes Artés. ­­­­­­­

From Silicon Valley to Linz

Robart was founded in 2009 by Artés and Michael Schahpar. “Michael and I both come from Linz. After my time in Silicon Valley I moved back home and we decided to build something new together,” Artés recalls. “Upper Austria is a really good location for high-tech companies and has excellent universities. We are also attractive to top talents from abroad with a scientific background. Robart has already brought some of them to Linz; people from a dozen nations work for us.” In 2015, Robart won the State of Upper Austria Innovation Award. “The State of Upper Austria supports us, for example, through the Research Promotion Agency FFG. This funding helped us a lot with the EIB. We had a better stand because we were already able to provide positive assessments,” Artés adds.

The robot scans the living space

What makes Robart technology special is the artificial intelligence with which a home robot detects its surroundings. It scans the living space with a laser, first creates a map – a room plan – and then chooses the best route. Unlike simpler models, this type of robot vacuum develops a comprehensive understanding of its environment. As a result, it always knows where it is, recognizes changes and can flexibly adapt its behavior. If you come home after shopping and put your bag on the kitchen floor, the robot recognizes the bag as a new obstacle, avoids it, but remembers the spot and cleans it the next time it goes by. You can control the high-tech vacuum cleaner via smartphone, but also naturally and intuitively with voice commands. It can be connected to Amazon’s Alexa, enabling you to spontaneously call it and tell it to start cleaning in the kitchen. To exclude the play corner, for instance, you simply mark the location in the app and declare the area a restricted zone.

“In the future, robots will perform many more tasks in the household, not only cleaning, but also disinfecting, they will fetch or pick up objects, serve as alarm systems and help old people,” anticipates Artés. “The funding from the EIB will help us make this vision a reality.”